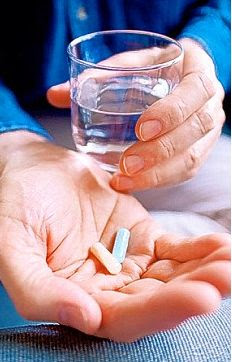 A headline in the AZCentral website boasts that "Experimental diet pill has promise, little risk".

Apparently a large study in the New England Journal of Medicine stated that this medication,

Lorcaserin caused more people to lose at least 5 percent of their body weight over one year, more than twice the rate achieved by those on dummy pills.

So what is this wonder drug? Yet another flavor of an SSRI i.e. like Prozac etc. And in fact, according to the newsletter, Heartwire, Lorcasin isn't that much different from fenfluramine - one of the medications in Phen-Fen:

Lorcaserin is a selective serotonin 2C receptor agonist, and previous studies have shown that drugs targeting serotonin are beneficial in weight loss. The nonselective serotonin agonist fenfluramine, which, along with phentermine, made up the antiobesity medication fen-phen, for example, was approved by the Food and Drug Administration (FDA) in the early 1970s as an adjunct for the treatment of obesity. It was pulled from the market after reports it caused valve disease and pulmonary hypertension.

And what was this amazing weight loss the drug caused? Well, the average weight loss among the people in the study, was 12 lbs over a year which they apparently kept off mostly during the second year of the study. This compared to a weight loss of 4.8 lbs in those taking sugar pills (Placebos).

Adverse events according to the researchers on the study ( abstract is available,) were 'only' headache, nausea and dizziness.

This isn't the only "wonder drug" coming out - there is another I recently read about called Qnexa which is really a combination of two already available medications, Phentermine (yes, the stimulant and part of Phen-Fen, the combination which caused Pulmonary hypertension in some people) and Topamax, the anti seizure drug. Vivus called the combination Phen/TPM in the FDA documents but obviously since that's uncomfortably close to the unsafe Phen-Fen, I'm sure it won't be marketed under that name.

According to the releases on this medication, the weight loss was better than the serotonin agonist above:

Qnexa showed the best weight loss results in clinical trials, with patients losing between 13 percent and 15 percent of their body weight. But the drug also had the highest rate of patient dropouts due to side effects, which include memory and concentration problems. Qnexa is a combination of two older drugs: the amphetamine phentermine and topiramate, an anticonvulsant drug sold by Johnson & Johnson as Topamax. According to the company, phentermine helps suppress appetite, while topiramate makes patients feel more satiated.

In other words, the Phentermine makes your heart beat faster (which can't be good for the heart) and the Topamax causes you to forget how hungry you are?

Kidding aside, there seems to be conflicting reports how much weight the cohort lost as well as what those side effects are. (Vivus, the manufacturer has not yet published their two 56 week long studies on the drug combo yet)

UPI reported a weight loss of 3-11 percent which is considerably less than reported in the Dallas news media:

Included in the review [for the FDA] are two randomized, double-blind, placebo-controlled 56-week trials conducted by Vivus and presented at medical meetings, but not yet published in peer-reviewed journals. Under the low dose, body weight losses were 3 percent or more, while the higher dose (including 100 mg of Topamax - enough to cause the adverse side effects) resulted in a body weight loss of about 11 percent.

I have a friend who was put on Topamax for seizures - she didn't lose any weight and she complained bitterly about the side effects of the drug. What she described which seems to have been missed in the news but was described in an FDA memo document was as follows:

When used at doses of 100 mg to 400 mg per day for migraine prophylaxis and the treatment of seizures, topiramate is associated, in a dose-related manner, with an increased incidence of cognitive-associated adverse events including confusion, psychomotor slowing, difficulty with concentration/attention, and difficulty with memory, speech or language problems, particularly word-finding difficulties.

Another adverse side effect reported on in the FDA memo was Metabolic acidosis in a percentage of the cohort on Qnexa - this could cause kidney stones as well as osteopenia:

(Having gotten a kidney stone once in my life, I would add- you so don't want to suffer that one - yes, it is true what people say, that the pain is exquisite and intense!)

Finally the FDA memo stated that although cardiac arrythmias and other cardiovascular events were of low incidence, there was no information available about the repercussions of using it for the long term treatment of obesity.

And according to the FDA Briefing document from the manufacturer, most of the year, those on in studies were told to change their lifestyles to one of regular exercise and calorie restriction, which will, of course, cause a weight loss without the drug.

One blog stated that the FDA had concerns about the drug combo:

FDA reports show that Qnexa has potentially bad side effects on the heart. Increased heart rate, depression, adverse effects on pregnant women and memory and language problems were noted during testing. Attention span also seems to decrease with usage.

Unfortunately, I could not find the affore mentioned FDA reports and the blogger did not give the cite however, since Phen-Fen caused serious heart problems, I would not be surprised if Phen-TPM did also. They will only find that out in the aftermarket studies after thousands of people have been the guinea pigs for the new drugs.

There is a dark side of stimulants also, (and the serotonin agonists also work as stimulants which is why they are often used to treat depression) according to "PROZAC BACKLASH" by Joseph Glenmullen, MD, is that on the long term, they can significantly raise the risk for Parkinson's disease, something which people are seldom warned about despite a body of research suggesting this. Serotonin agonists tend to cause a flood of the brain chemical serotonin, which causes the brain to react by producing more dopamine - this imbalance of an overage of dopamine is what is thought to raise the risk for Parkinsonism.

Additionally some "whole life" animal studies have suggested that longer term use of the serotonin agonists can also damage the serotonin receptors in the brain.

The only wonder about these two drugs in my book is that I would bet people will buy them, still looking for the elusive "easy way out" of counting calories and exercising to achieve and maintain weight loss.

Truth being that people do not have to lose weight to get healthy - they only have to make mostly healthy food choices and try to exercise (cardio) 4-5 times a week - this is called HAES and is well proven by clinical studies including the 2 year study at USC - researchers on this clinical study were Linda Bacon and Judith Stern and since Stern is a member of the Weight Watchers International Medical advisory committee, she would have undoubtedly, preferred a different finding than the finding of the HAES study i.e. that healthy lifestyle without a focus on weight loss trumped dieting as far as reducing health risks.

Take a look: Link for the HAES study

Thankfully, the FDA did not approve Qnexa.
http://pagingdrgupta.blogs.cnn.com/2010/07/15/fda-panel-says-no-to-new-diet-drug/?hpt=T2

I take topamax for migraines, but thankfully, it's the minimal dosage of 25 mg 2x a day. Even so, the first thing my neurologist said was that it might help me lose weight. Like I cared about that, all I wanted was something to stop the migraines I'd been dealing with for years. If she even suggests adding phentermine to it, she'll get told no way, in no uncertain terms (I already went the phen-fen route and lucked out there, with no damage from 6 months of it, no way am I willing to risk another combination like that).